What Makes an Artist's Book?

I recently had a discussion with a friend (the wonderful Amanda Langdon) about artists' books when she was trying to describe them for a paper. Talking with her gave me the opportunity to think about how I define an artist's book (especially since the published literature and the content of library collections gives such broad, and sometimes conflicting, definitions.)


The big thing that I think separates an artist's book from a commercially-produced book is the interplay between form and content. Broadly defined they're books created primarily to be 'art' rather than to be a book in the traditional sense. They are still functional (ie you should be able to interact with them as books) but they were not created by a publishing house with the sole purpose of showcasing an author's content-they were created by an artist to showcase both their binding work and the interaction between content and form.

For those who aren't familiar with the book arts, the content of a book is just what's written in it (i.e. the text of a novel) while the form is its physical structure (is it paperback? What kind of binding does it have? How many pages? etc.) Most books focus on providing the text, with less emphasis on showcasing the book's form--the form is structured around the text, and around other considerations (i.e. marketing an inexpensive paperback versus a higher-quality hardcover). This is not to say that they don't take a great deal of effort and consideration when choosing and creating cover art (and even things you might not think about, like the font), but mass-produced book is not an artist's book simply because the creation of the book is solely to share text, and is not to see that text as art placed within another piece of art in a way that strengthens both.

Amanda and I also talked a bit about 'gray areas:' i.e. where does an artist's book cross the line to become something else? She talked about printed books, which I argue can be considered artist's books: A small press (like the UICB presses--look on their website, but I think one is called Arion Press. There have been others over the years) creates small runs of 'artists' books' that are considered such because they are created on a letterpress and then bound by book artists. Usually, the printers create special plates of images to go along with the letters, but even if they don't the fact that they are hand-placing those letters, inking the rollers, etc. in a specific way is considered an art form.

So that's probably what she means by publication--they aren't going to be mass-produced (like paperback mysteries or even any other fiction).

I think that small press books (especially letterpress, which is an art in itself) can be considered artist's books as long as the crucial element of interplay between text, images, and form is present. Other books that have text and images use the images only to illustrate the text, whereas the artists' book uses them for that purpose and for both image and text to interact with the way it's bound (and they way it's meant to be held and experienced). When that interplay is lost is when I think the book crosses the line to being a more commercial work.


For other book artists, curators, historians, and librarians, I would be interested to hear your thoughts too: what do you think of my definitions? How would you define an artist's book?
Posted by Julia at 11:25 AM 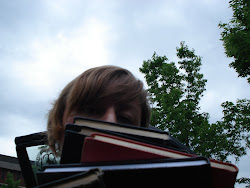 http://creativecommons.org/licenses/by-nc/3.0/ This page licensed by Julia Skinner under a Creative Commons Attribution-Non-Commercial 3.0 license. For more information on licensing, or to obtain permission for commercial use of my work, please contact me!